Chakra. Chakra is a Sanskrit word meaning "wheel" or "vortex". We have seven master chakras (energy points) running from our head to the base of our spine. These centers were named as such because of the circular shape of the spinning energy centers, which exist in our subtle etheric body, the non-material energetic counterpart to our physical bodies.The energy centers(Chakras) we are talking about are in both the physical and metaphysical bodies.

Everything that exists in this universe is just vibrations of energy. That means each energy center in our physical body and the subtle body will also have a specific vibration. Each of our energy centers contains a particular frequency in which they should vibrate to be in balance and harmony, with all other energy centers facilitating perfect health at all levels.

The locations of these energy centers in the human body correspond with the locations of the endocrine glands. The activation of these energy centers helps gain control over the functioning of glands and achieve homeostasis condition.
Using AFT Quantum Healing Products, which resonate at Zero Point Energy on these chakras, which in turn activates the Major Glands that allows us to cleanse, activate and align these subtle energies. 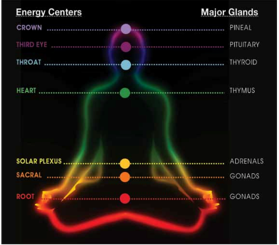 The pineal gland is located within the brain. It is safely positioned in the groove at the center of the brain, between the two hemispheres. It releases melatonin, which supervises the biological clock of the body. It controls our walking and sleeping patterns. Sexual development is also controlled by the pineal gland. Melatonin helps avoid and get over jet lags. In the ancient times, the pineal gland was considered as the third eye, with supposed magical powers.

The pituitary gland, located at the base of the skull, is known as the 'master gland'. It controls the functions of other ductless glands. This tiny, pea-shaped gland is one of the most important parts of our body. It is divided into anterior and posterior pituitary. It influences metabolism, reproduction, and growth by releasing hormones like prolactin, thyroid stimulating hormone, adrenocorticotropic hormone, growth hormone, oxytocin, luteinizing hormone, follicle-stimulating hormone, etc

The thyroid gland, located in the neck, looks like a butterfly. It weighs less than an ounce. Situated below our voice box, thyroid's main function is to regulate body metabolism. Functions of the body are severely affected when the thyroid does not work well. Overactive or underactive thyroid gland leads to several health problems. Hormones secreted by the thyroid play an important role in the generation of heat and energy, protein synthesis, vitamins, protein, fat, and carbohydrate metabolism, release, and functions of other hormones, increased the sensitivity of the body to other hormones like adrenaline, etc. Thyroid hormones (T3 and T34) are produced with the help of iodine and tyrosine.

The thymus, situated in the middle of the chest, beneath the upper part of the breastbone near the heart, is a pyramid-shaped small gland. It builds resistance for combating diseases and helps in one's physical development. The size of the thymus grows during the neonatal and pre-adolescent periods. It is most active in the early years after birth. It plays an important role in the functioning of the immune system. As the body reaches puberty, it starts shrinking. In adults, it is difficult to identify thymus.

The pancreas, located behind the stomach, is yellowish in color. It is about 7.5 inches long and 1.5 inches wide. It is connected to the small intestine. Certain cells in the pancreas secrete digestive enzymes which play an important role in the digestion of proteins, carbohydrates, and fats. Important hormones insulin and glucagon are secreted into the blood stream by the pancreas. Thus pancreas works as an endocrine as well as an exocrine gland. As we all know, insulin helps lower the blood sugar level. But if glucose level is found to be too low, glucagon helps increase it. Malfunctioning of insulin-generating cells results in diabetes. Pancreas helps neutralize the chyme.

The adrenal glands look like triangular hats placed on the top of the kidneys. The length of an adrenal gland is about one or two inches and it weighs only a fraction of an ounce. Though small in size, these glands secrete almost three dozen hormones! The main functions of adrenal glands include carrying out the metabolic processes and helping the body deal with stress. These glands regulate the 'fight or flight mechanism' of the body. Adrenal medulla releases adrenaline and noradrenaline while the adrenal cortex releases cortisol.

The Root chakra is one of the seven primary chakras which is located at the base of the spine. It is the root of your being and establishes the deepest connections with your physical body, your environment and with the Earth. The Root Chakra is responsible for your sense of safety and security on this earthly journey. The Root Chakra is comprised of whatever grounds you need to stabilize your life. This includes your basic needs such as food, water, shelter, and safety as well as your emotional needs such as letting go of fear. It plays an important role in your sexual life also.